Success of Women in Agritourism: She Will Get What She Wants-Factsheet Published

Find this article at:
go.ncsu.edu/readext?546604
— Written By Maude Dinan 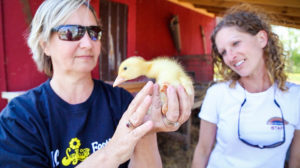 Photo courtesy of Meredith C. Browne–See It All Media.

When we hear “farmer” what comes to mind? Many may say overalls, heavy equipment, and a man behind it all. Despite the prominence of women in agriculture, and increasingly in agritourism, women rarely receive the recognition deserved of their pivotal role in this enterprise. Curious to dig further in this lack of recognition, Dr. Carla Barbieri and her team started a study in 2015 to identify barriers, visions of success, and opportunities among NC female farmers in agritourism. Early findings revealed women facing structural constraints, such as a lack of reliable staff. It also unveiled societal obstacles and biases that hinder their agritourism success.

The project has since evolved: the team just released the Success of Women in Agritourism factsheet summarizing key results from a survey of 180 women in agriculture across North Carolina. Addressing women’s roles as farmers, entrepreneurs, and stewards of their community, the survey provided a holistic understanding of women’s success in agritourism. Bringing visitors to the farm (agritourism) not only increases farmers’ income, but educates the public about farming. As most agritourism is led and innovated by women, maximizing their success is critical to enhance their identity in agriculture and enhancing society as a whole.

From the findings, the study suggests numerous approaches to improve the chances of women success in agritourism. The researchers’ work has demonstrated profound outreach impact already, emphasizing an active and growing network of female farmers regionally. They have also produced a video series documenting successful female farmers in agritourism.

Barbieri’s team continues working to publish their results and expand their outreach efforts. While the researchers work tirelessly to advance this knowledge, they prompt society to contribute to improving women’s identity in agriculture and foster opportunities for their success in agritourism. Whether it is acknowledging our own biases, or encouraging women farmers to network and support each other, a successful and equitable future in agritourism is attainable.