Find this article at:
go.ncsu.edu/readext?755712
— Written By Ann Savage

There is no question that the travel industry has been hit hard by the pandemic. Many destinations are struggling with the effects of the virus while others have seen an influx of new visitors. Jackson County in western North Carolina was one such destination that saw a sharp rise in visitation after the first few months of COVID-19.

“We saw significant declines of occupancy in March and April – once local lodging restrictions were lifted and the general public began traveling, the decline in overnight stays was not as significant as other destinations. Comparing May to last year, we only saw a 14% decrease in occupancy tax remitted” says Nick Breedlove, Executive Director of Jackson County NC Tourism Development Authority (TDA).

“And then in June we actually increased occupancy tax collections over the previous year by 53%. And it continued into July which became our highest single month in our almost 98-month history.” Since July, rates have continued to exceed 2019 levels. “Jackson County primarily relies on leisure travel, whereas major destinations who rely on corporate and group travel are seeing occupancy rates in twenty to thirty percent ranges,” he said. 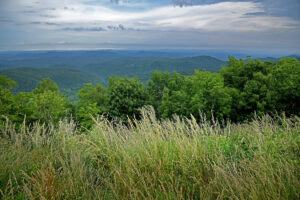 A view from the Blue Ridge Parkway in Western NC.

Vacation rentals have seen the greatest increase in stays during the pandemic. Taxes collected from hotels in August for both 2019 to 2020 were around $52,000. However, vacation rentals, while similar in August 2019 at $56,000 tax collected, soared in August 2020 to $142,000. It is important to note direct comparisons between hotel and vacation rental taxes remitted per month can be misleading since hotel taxes are collected upon visitors’ stay while vacation rental taxes are collected when booking occurs. However, another post-pandemic trend highlights the short window in which travelers are now booking their trips, 0-15 days being the most common, indicating that these could be more telling (ADARA, 2020; Phocuswire, 2020)

Breedlove welcomes the visitors wherever they are lodging but points out “it’s clear from spending habits that consumers (for now) have greater confidence in Airbnb and VRBO. It is interesting because all of our hotels have gone above and beyond in sanitizing and disinfecting. There’s nothing pointing to the rationale for why visitors prefer Airbnb and VRBO over more traditional lodging.” This trend in Jackson County is being seen across the country and world as an AirDNA and Smith Travel Research report from this summer shows higher vacation rental occupancy rates at more consistent levels and prices (SOURCE). 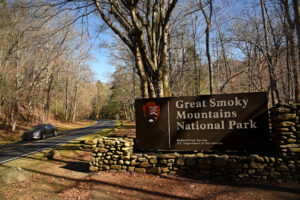 With the significant rise in visitation, the destination is particularly concerned with sustainability and visitors “not loving our spaces to death and over-utilizing them.” The challenge of an influx of people especially on the natural amenities that make Jackson County such a popular destination has driven partnerships with Leave No Trace® and Recreate Responsibly to put up signs at over a dozen river access points and popular hiking trails to remind visitors how to care for the outdoors.

The importance of protecting North Carolina’s outdoor amenities has become a priority in response to the pandemic and people wanting to get outside and explore in large numbers. VisitNC, the statewide destination marketing organization, became the first coastal state to enter a partnership for the Leave No Trace® Center for Outdoor Ethics to protect the state’s natural assets in response to large numbers of visitors to outdoor spaces (SOURCE). 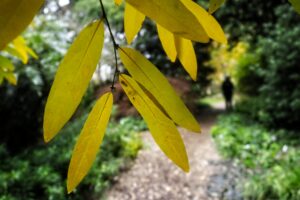 A person walks along a pathway (trail). Photo by Marc Hall

Another concern of Breedlove is the health of his community and its residents, particularly as cases continue surging across the country again. “We have done a lot in terms of public education about COVID,” he said. Efforts include high profile signage along roadways, sticker campaigns, buttons for hospitality workers reminding the public to wear masks, banners, and now digital billboards.

“The billboards remind people of best practices. Wash your hands. Wear masks. That’s not something a TDA would traditionally do but at a certain point when the cases rise to a level where you’re seeing lots of new cases in the last 14 days, you have to ask yourself as a destination leader, if we don’t contain this locally, we’ll be a less desirable destination.”

Being flexible and getting creative to produce multifaceted ad campaigns to support local shops and restaurants is always top of mind for the Jackson County TDA. Currently, they are running a dining campaign to motivate spending in local restaurants that are small, independently owned and entering the winter season making dining outdoors less desirable. The campaign is designed so “visitors driving by will see the bright A-frame sidewalk signs, stop in the business, and hopefully drive incremental spending for the restaurant,” he said. Our hopes are they continue to explore our town after dining and support our retail scene. But also, the signs are for the community too, because there’s a lot of local residents who aren’t patronizing downtown businesses. So, it’s a visual reminder “hey, we’re taking precautions, we’re safe, stop in.”

Asked about the importance of tourism in Jackson County and residents’ sentiment, Breedlove recalled a phrase colleague Maura Gast from Irving, Texas uses: “It’s cash in hand economic development.” He expands “there’s no other industry in Jackson County that puts $563,000 on average a day into cash registers.” Discussing further the role of tourism in the community and importance of recovery Breedlove affirmed, “I think if anything the COVID pandemic actually shined a bright light on how valuable the tourism economy is. And how removing it affects everything.”