A Chat With Science by the Sea

Find this article at:
go.ncsu.edu/readext?875120
— Written By Ann Savage

Tourism Extension recently sat down for a chat with Miriam Sutton who is the sole owner and operator of Science by the Sea, a 501c3 providing educational support to academic and general audiences while assisting research institutions with broader impacts through education, communication, and outreach. Science by the Sea began as a passion project for Miriam, who was at the time, a middle school science teacher. Sutton has always been an avid outdoor enthusiast enjoying exploring and photographing the waters around her home in Beaufort, North Carolina. She started to use that time to create educational videos for her middle school science classes. These became valuable tools to teach the students about oceans and estuaries and their importance in the conservation and preservation of our oceans. This enthusiasm for the outdoors and education eventually led to an opportunity to get others on the water by leading kayak tours with discussions on their surroundings. 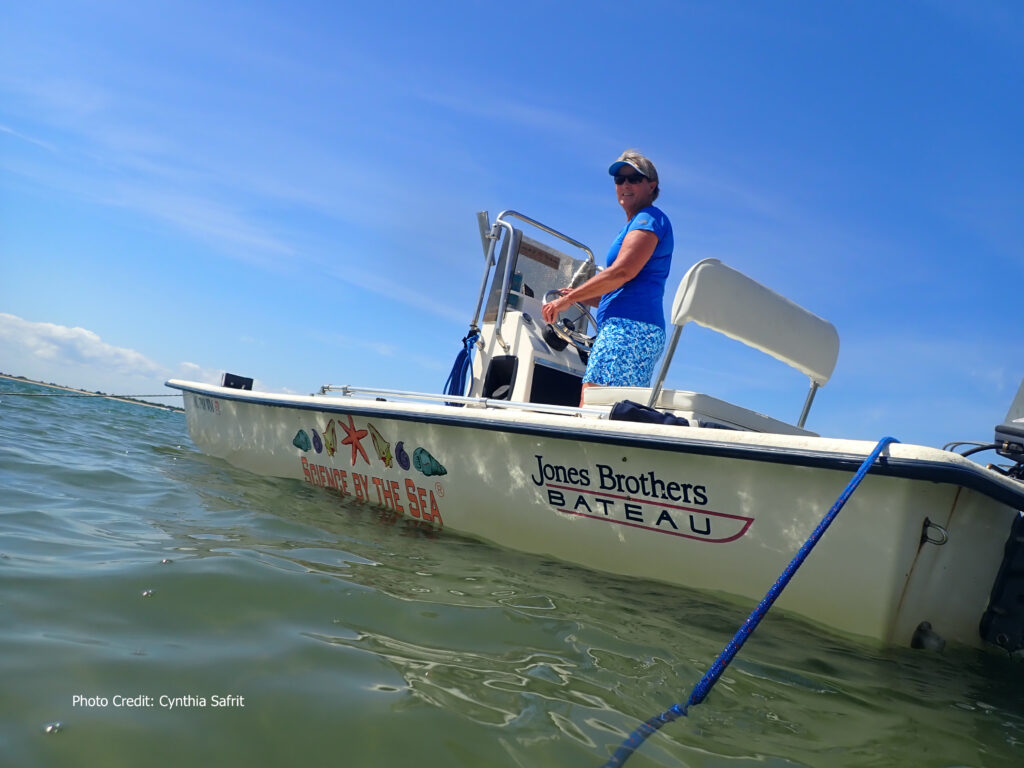 Sutton driving her boat through the Rachel Carson Preserve.

Sutton has since retired from teaching but continues making educational videos for her Youtube channel, Science by the Sea. She also continuesto give her educational tours on the Rachel Carson Reserve but those tours have changed a bit too. She had several close friends for years tell her she should use her motorboat to tour people through the Reserve, allowing them to ride and enjoy the experience rather than having to paddle themselves through the marshes. When she finally decided to give it a try, she realized her friends were on to something! She was pleasantly surprised at the eagerness of people to get out on the water and relax and listen to her interpretation. Since adding the motorboat option most of her business has trended away from kayak and stand-up paddleboard tours. A majority of her bookings are from Airbnb Experiences, an additional service Airbnb began offering not too long after Sutton started offering the motorboat option. Airbnb Experiences has led to new clients she likely never would have met that are learning to appreciate the value of the estuaries to the coastal communities and judging from the nearly 80 5-star reviews, they are enjoying their time on the water as well.

Miriam is one of the few female captains in coastal NC and she doesn’t really think much about it. She just followed her passion for the estuaries, coastal communities and education and it led her down this path. The main challenges she faces are weather-centered. And when asked what advice she would offer to those looking to follow a similar path she had two key points to share. First, get trademarked as soon as you decide on your name. This turned out to be more important than she could have predicted early on and she was grateful for her foresight which saved her a lot of time and energy. The other piece of advice is to know your goals as a business from the beginning and to develop your business with those in mind. Sutton is retired and is not offering these experiences to make a living, she uses the funds from her tours to cover her equipment costs and to attend professional development opportunities to stay abreast of the ever-changing fields of science. She also donates a portion of her tour proceeds back to the Rachel Carson Reserve where her tours are held. She recognizes that this may not be feasible for others and stresses finding a business model that matches your goals both personally and financially. 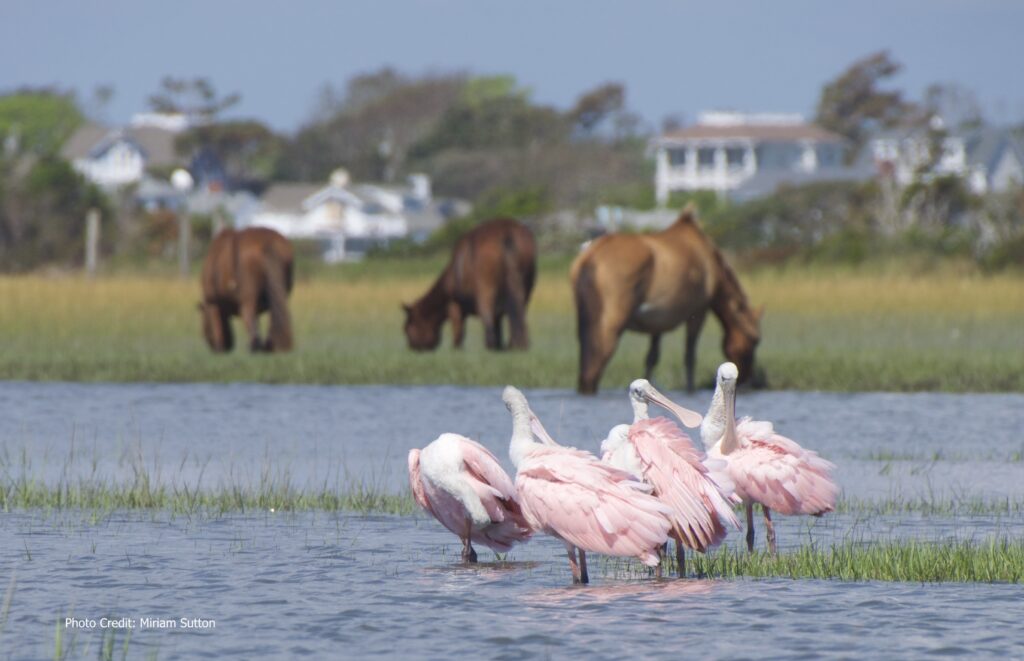 Roseates in the water with horses in the background.

The initial connection to Sutton was made due to a request to a colleague on the coast about interviewing a woman-owned/operated outfitter. This led to a deeper discussion than initially planned but a valuable one. Sutton mentioned another woman captain down the road from her, Katrina at the Marina in Newport, who focuses on teaching women how to run boats which seems to be a valuable need. While this is not a representative sample, it is interesting these two women have education as a central component of their work. This particularly struck accord when reflecting on previous Tourism Extension research on women in agritourism that found education was central to these women’s definition of success. If you know of more women working as captains or outfitters across North Carolina we would be interested in learning more from them about their work, motivations, and how they define success.